What caused the disappearance of Homo neanderthalensis, a species that apparently had as many capabilities as Homo sapiens? There are several theories that try to explain it: climate, competition with Homo sapiens, low genetic diversity… A study in which the Universitat de València is participating analyses the first cervical vertebra of several Neanderthals and confirms that the genetic diversity of the population was low, which made it difficult for them to adapt to possible changes in the environment and, therefore, to survive. The research has been published in the Journal of Anatomy.

Professor Juan Alberto Sanchis Gimeno, from the Department of Human Anatomy and Embryology of the Faculty of Medicine and Dentistry of the Universitat de València; the National Museum of Natural Sciences (MNCN-CSIC), and the National Centre for Research on Human Evolution (CENIEH) have participated in the study. Three vertebrae from the Krapina site (Croatia) have been analysed and material from other sites has been reviewed.

In Homo sapiens the anatomical variants of the atlas have been widely studied in recent years. In the case of modern humans, the atlas shows some of the different anatomical variants in almost 30% of cases. “However, probably due to the poor preservation of this cervical vertebra and the little material recovered in the fossil record, the atlas of Neanderthals have hardly been observed under this magnifying glass,” says Juan Alberto Sanchis Gimeno, a researcher at the Universitat de València.

Recently, researchers from the MNCN Paleonanthropology Group determined the presence of different anatomical variants in the atlases of the Neandertals from the El Sidrón site (Asturias). In order to confirm the high prevalence of anatomical variants of this species, they thoroughly analyzed the fossil atlases of the Neandertals from the Krapina site (Croatia). “Krapina is a site of about 130,000 years old, compared to about 50,000 years old in El Sidrón. It is the site from which the largest number of Neanderthal remains have been recovered, which makes it a sample of special interest in the analysis of the genetic diversity of this species since potentially all the individuals belonged to the same population,” points out Daniel García-Martínez, researcher at the CENIEH.

The study of the anatomy of the three atlases recovered in this site has revealed the presence of anatomical variants in two of them (66%). One of them, known as Unclosed Transverse Foramen, UTF, has a prevalence of only 10% in modern humans. “Checking the presence of these anatomical variants in Krapina, together with the review of other atlases presented to the scientific community that have not been analyzed under this perspective until now and that yield similar data (more than 50%), suggests that the number of variants in Neanderthals is significantly higher than that of current humans,” says Palancar.

“These data support the theory that their genetic diversity was very low and confirm that this could be one of the causes of their disappearance,” concludes MNCN researcher Markus Bastir.

The CENIEH has participated in a paper published in the Journal of Anatomy on the first cervical vertebra, atlas, of several Neanderthals from the Krapina site (Croatia), which confirms that the genetic diversity of these populations was low

What caused the disappearance of Homo neanderthalensis, a species which apparently possessed as many capacities as Homo sapiens? There are several theories attempting to explain this: the climate, competition, low genetic diversity… Daniel Garcia Martínez, a researcher at the Centro Nacional de Investigación sobre la Evolución Humana (CENIEH), has participated in a study published in the Journal of Anatomy, on the first cervical vertebra of several Neanderthals, which confirms that the genetic diversity of the population was low, thus hampering their capacity to adapt to possible changes in their environment and, therefore, their survival.

The Neanderthals inhabited the European continent until barely 30,000 years ago, and their disappearance continues to be a mystery. Work to decipher their genome has been carried out to determine their genetic diversity, as have analyses of different anatomical characteristics in the fossil record of the species.

In H. sapiens, the anatomical variants of the atlas have been extensively studied over recent years. With regard to modern humans, the atlas presents one or more of the different anatomical variations in almost 30% of cases.

In this study, in which researchers from the Museo Nacional de Ciencias Naturales in Madrid (MNCN-CSIC) and the Universidad de Valencia also participated, three vertebrae from the Krapina site (Croatia) were analyzed, and the material from other sites such as El Sidrón (Asturias) was reviewed.

Recently, researchers from the Paleoanthropology Group at the MNCN determined the presence of different anatomical variants in the atlases from the El Sidrón Neanderthals. With the objective of confirming the high prevalence of these anatomical variants in the species, they conducted exhaustive analyses of the Neanderthal fossil atlases from Krapina.

“Krapina is a site around 130,000 years old, compared with the age of 50,000 or so for El Sidrón. This is the site from which the highest number of Neanderthal remains has been recovered, which makes these a sample of particular interest when analyzing the genetic diversity of this species, as all the individuals may potentially have belonged to the same population”, says García-Martínez. 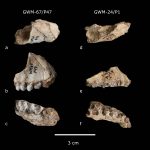 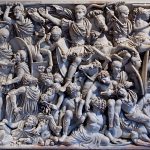 Northern Barbarians in the eyes of the Romans