Cetaceans, the group including whales and dolphins, originated in south Asia more than 50 million years ago from a small, four-legged, hoofed ancestor. Now, researchers reporting the discovery of an ancient four-legged whale–found in 42.6-million-year-old marine sediments along the coast of Peru–have new insight into whales’ evolution and their dispersal to other parts of the world. The findings are reported in the journal Current Biology on April 4.

The presence of small hooves at the tip of the whale’s fingers and toes and its hip and limbs morphology all suggest that this whale could walk on land, according to the researchers. On the other hand, they say, anatomical features of the tail and feet, including long, likely webbed appendages, similar to an otter, indicate that it was a good swimmer too.

“This is the first indisputable record of a quadrupedal whale skeleton for the whole Pacific Ocean, probably the oldest for the Americas, and the most complete outside India and Pakistan,” says Olivier Lambert of the Royal Belgian Institute of Natural Sciences.

Some years ago, study co-author Mario Urbina of Museo de Historia Natural-UNMSM, Peru, discovered a promising area for digging fossils in the coastal desert of southern Peru, named Playa Media Luna. In 2011, an international team, including members from Peru, France, Italy, the Netherlands, and Belgium, organized a field expedition, during which they excavated the remains of an ancient whale they’ve since named Peregocetus pacificus. It means “the traveling whale that reached the Pacific.”

“When digging around the outcropping bones, we quickly realized that this was the skeleton of a quadrupedal whale, with both forelimbs and hind limbs,” Lambert says.

With the help of microfossils, the sediment layers where the skeleton was positioned were precisely dated to the middle Eocene, 42.6 million years ago. Anatomical details of the skeleton allowed them to infer that the animal was capable of maneuvering its large body (up to 4 meters long, tail included), both on land and in the water. For instance, features of the caudal vertebrae (in the tail) are reminiscent of those of beavers and otters, suggesting a significant contribution of the tail during swimming.

The geological age of the new four-limbed whale and its presence along the western coast of South America strongly support the hypothesis that early cetaceans reached the New World across the South Atlantic, from the western coast of Africa to South America, the researchers report. The whales would have been assisted in their travel by westward surface currents and by the fact that, at the time, the distance between the two continents was half what it is today. The researchers suggest that, only after having reached South America, the amphibious whales migrated northward, finally reaching North America.

The international team continues to study the remains of other whales and dolphins from Peru. “We will keep searching in localities with layers as ancient, and even more ancient, than the ones of Playa Media Luna, so older amphibious cetaceans may be discovered in the future,” Lambert says.

This work was supported by the Muséum National d’Histoire Naturelle, Paris, and the Italian Ministero dell’Istruzione dell’Università e della Ricerca.

Current Biology (@CurrentBiology), published by Cell Press, is a bimonthly journal that features papers across all areas of biology. Current Biology strives to foster communication across fields of biology, both by publishing important findings of general interest and through highly accessible front matter for non-specialists. Visit: http://www.cell.com/current-biology. To receive Cell Press media alerts, contact [email protected]. 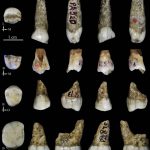 Tongzi hominids are potentially a new human ancestor in Asia 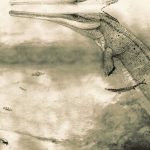