Environmental and climate changes influenced the origin of the genus ‘Homo’

CENIEH participates in a study on Mille-Logya, a new site located in the emblematic Afar region (Ethiopia), which reinforces the relationship between the origin of the Homo genus and the climatic and environmental changes that took place on the African continent between 2.5 and 3 million years ago

Several hypothesis suggest a link between the origin of the genus Homo and the climatic and environmental changes that took place in Africa between 2.5 and 3 million years ago. The geological and paleontological analyses of a new site, Mille-Logya, located in the emblematic region of Afar (Ethiopia) where the species Australopithecus afarensis was found, reinforces with new data these hypothesis.

A new study, published in Nature communication by an international team led by Zeresenay Alemseged from the University of Chicago, and with the participation of the geochronologist from the Centro Nacional de Investigación sobre la Evolución Humana (CENIEH), Mark Jan Sier, reports the finding of four hominin remains (two ulnae fragments, a calvarium fragment and an upper second molar) together with a large sample of faunal remains that include hypopothamus, bovids, giraffes, crocodiles, hyenas and horses.

The fossil samples come from three different areas, Gafura, Seraitu and Uraitele dated from 2.4 to 2.9 million years. “This site represents a unique opportunity to study fossils from an age range that normally is missing in the Afar area”, says Mark Jan Sier, from the Geochronology and Geology Programme of CENIEH and who contributed to the dating of the site with the paleomagnetic analysis.

The comparison of the fauna from the three different areas within Mille-Logya, as well as with that found in the nearby localities of Hadar and Dikika, where famous Australopithecus afarensis samples were found, suggests an important faunal and paleoenvironmental change during this period in this region of Africa.

The faunal and paleoenvironmental reconstructions suggest that the earliest members of Homo were associated with more open environments than Australopithecus was. The in situ faunal change at Mille-logya may be linked to environmental and climatic factors that may have caused Homo to emerge in from Australopithecus or to migrate to the region as part of a fauna adapted to more open habitats. 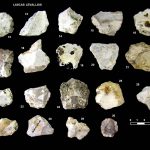