Prehistoric Iberians created “imitation amber” by repeatedly coating bead cores with tree resins, according to a study published May 1, 2019 in the open-access journal PLOS ONE by Carlos Odriozola from Universidad de Sevilla, Spain, and colleagues.

Many studies have confirmed the ornamental and symbolic importance of amber to European prehistoric peoples. This study is the first to discuss potential prehistoric Iberian “imitation amber” beads made using the application of repeated resinite coatings on top of a bead core.

The authors obtained beads from two prehistoric sites in Spain: two from a cave tomb at the La Molina site in Sevilla, dating from the 3rd millennium BC, and four from a burial site in Cova del Gegant near Barcelona, dating from the 2nd millennium BC. Using infrared spectroscopy, an electron microscope probe, x-ray diffraction, and spectroscopy, the authors were able to study the chemical composition and structure of all six bead cores and coatings.

The beads from Cova del Gegant had a mollusk shell core, covered by a multilayered coating made up of tree resins, most likely pine. The beads were covered by a calcium-containing white deposit, which likely precipitated post-burial from the bone tissue of buried individuals. The beads from La Molina were also composed of a core covered by an amber-like resin, as well as two topmost layers of cinnabar and calcite which probably coated the beads post-burial.

The authors speculate these coating technologies were used to imitate amber’s translucence, shine, and color, since during this prehistoric period, amber was relatively rare and highly in demand. However, both tomb sites contained other exotic materials such as ivory, gold and cinnabar, so it’s not clear why individuals able to obtain these rare goods would use amber alternatives. The authors speculate that, especially in the Cova del Gegant where “imitation amber” was found directly alongside true amber beads, unscrupulous traders may have substituted low-cost fake amber to cheat their buyers. The authors also suggest chemical analysis of apparent “amber” artifacts could prevent erroneous amber identification in future studies of such Iberian sites.

Press release from the Public Library of Sciences (PLOS) 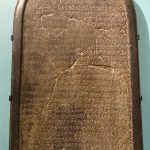 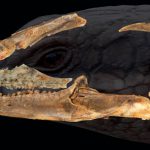