The reason that humans shifted away from hunting and gathering, and to agriculture — a much more labor-intensive process — has always been a riddle. It is only more confusing because the shift happened independently in about a dozen areas across the globe.

“A lot of evidence suggests domestication and agriculture doesn’t make much sense,” says Elic Weitzel, a Ph.D. student in UConn’s department of anthropology. “Hunter-gatherers are sometimes working fewer hours a day, their health is better, and their diets are more varied, so why would anyone switch over and start farming?”

Weitzel sought to get to the root of the shift in his new paper in American Antiquity, by looking at one area of the world, the Eastern United States.In a nutshell, he looked for evidence to support either of two popular theories.

One theory posits that in times of plenty there may have been more time to start dabbling in the domestication of plants like squash and sunflowers, the latter of which were domesticated by the native peoples of Tennessee around 4,500 years ago.

Weitzel tested both hypotheses. He did this by analyzing animal bones from the last 13,000 years and taken from a half-dozen archeological sites in northern Alabama and the Tennessee River valley, where human settlements and their detritus give clues about how they lived, including what they ate. He coupled the findings with pollen data taken from sediment cores collected from lakes and wetlands, cores that serve as a record about the types of plants present at different points in time. The findings are … mixed.

Weitzel found pollen from oak and hickory, leading to the conclusion that forests composed of those species began to dominate the region as the climate warmed, but also led to decreasing water levels in lakes and wetlands. Along with the decreasing lakes, the bone records showed a shift from diets rich in water fowl and large fishes to subsistence on smaller shellfish.

Taken together, that data provides evidence for the second hypothesis: There was some kind of imbalance between the growing human population and their resource base, effected perhaps by exploitation and also by climate change.

But Weitzel also saw support for the first hypothesis in that an abundance of oak and hickory forest supported an equally prevalent game species population. “That is what we see in the animal bone data,” says Weitzel. “Fundamentally, when times are good and there are lots of animals present, you’d expect people to hunt the prey that is most efficient,” says Weitzel. “Deer are much more efficient than squirrels for example, which are smaller, with less meat, and more difficult to catch.”

A single deer or goose can feed several people, but if over-hunted, or if the landscape changes to one less favorable for the animal population, humans must subsist on other smaller, less efficient food sources. Agriculture, despite being hard work, may have become a necessary option to supplement diet when imbalances like these occurred.

Despite the mixed results, the findings supporting domestication happening in times when there was less than an ideal amount of food is significant, says Weitzel.

“I think that the existence of declining efficiency in even one habitat type is enough to show that … domestication happening in times of plenty isn’t the best way to understand initial domestication.” The broader context of this research is important, says Weitzel, because looking to the past and seeing how these populations coped and adapted to change can help inform what we should do as today’s climate warms in the coming decades.

“Having an archaeological voice backed by this deep-time perspective in policy making is very important.”

Press release from the University of Connecticut 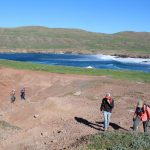 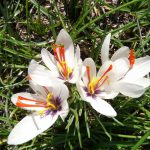