Researchers at the CENIEH investigate those properties of Lower Paleolithic industry that affect visual perception, and the results suggest the morphology of handaxes exercises a moderate influence on the attention paid to the tool, while the visual exploration of choppers is only influenced by their weight

Scientists at the Centro Nacional de Investigación sobre la Evolución Humana (CENIEH) have analyzed the influence of the shape of Paleolithic tools on visual attention during handling in a study led by María Silva Gago and published in the journal Lithic Technology, whose results suggest that the morphology of handaxes exercises a moderate influence on the attention paid to the tool, while the visual exploration of choppers is only influenced by their weight.

Longer handaxes are more comfortable to handle, so that less time is spent on exploring the grasping zones. However, the heaviest choppers attract more attention to their functional areas, undoubtedly due to the need to dedicate more time to evaluating their capacities for percussion.

The different visual behaviors derived from employing these two technologies suggest differences in the visuospatial process during interaction with these two types of tools. Choppers facilitate identification of the properties related to their function, which are the first and the easiest to spot as they offer basic information about use of the tool, while more complex utensils like handaxes tend to prompt more exploration of the handling characteristics, requiring more difficult motor processing.

“Curiously, other variables like symmetry do not appear to influence visual exploration, even though this is a key property of handaxes and a factor that commonly affects the observation of anything at all”, says Silva Gago.

Size and shape are the main features to be considered when handling an object, as these affect how it is grasped and how the senses perceive it. To determine how these properties affect visual perception, the researchers studied the shape using geometric morphology analysis, and visual attention was assessed by applying eye tracking technology during interaction with tools typical of the Lower Paleolithic, with the help of 43 volunteers.

Geometric morphometry makes it possible to quantify the shape and size of an object from reference points defined in Cartesian coordinates. On the other hand, eye tracking consists of detecting the pupil using an infrared system which projects the gaze of the participant upon the scene being observed.

This is the third paper by the Paleoneurology Group, coordinated by Emiliano Bruner, on the analysis of visual perception and lithic industry. In the earlier studies, the visual attention of the volunteer participants was analyzed as they were allowed to observe images of stone tools freely, and while they explored real tools.

“The differences found in the observation pattern between choppers and handaxes were associated to changes in behavior in the initial stages of the body-tool interaction”, explains Silva Gago, who was also able to avail of the collaboration of the University of Lincoln (United Kingdom), Universidad Isabel I in Burgos, and the Centro de Arqueología Experimental de Atapuerca (CAREX), for this work. 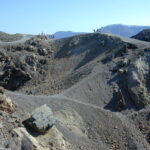 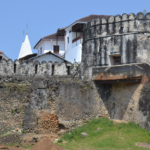