Discovery of extracts from a lost astronomical catalogue

Researchers from the CNRS, Sorbonne Université and Tyndale House (affiliated with the University of Cambridge) have recently found fragments of the Star Catalogue composed by the Greek astronomer Hipparchus during the 2nd century BC. These texts, which had been erased from a manuscript during the medieval period in order to reuse the pages, were uncovered using multispectral imaging technologies. The study of these extracts, published in the Journal for the History of Astronomy on October 18, 2022, sheds new light on astronomy in antiquity.

Old grimoires, even for the most Cartesian minds, often contain coveted secrets, such as the fragments of an ancient astronomical treatise lost for centuries: the Hipparchus Star Catalogue. Written between 170 and 120 BC by the Greek astronomer Hipparchus, it is the oldest known attempt to determine the precise position of fixed stars by associating them with numerical coordinates.

Until now, this text was known only through the writings of Claudius Ptolemy, another ancient astronomer who composed his own catalogue nearly 400 years after Hipparchus. Researchers from the Centre Léon Robin de recherche sur la pensée antique (CNRS/Sorbonne Université) and their British colleague from Tyndale House in Cambridge have just deciphered the descriptions of four constellations from Hipparchus’ Star Catalogue.

This discovery comes from the Codex Climaci Rescriptus1  ‒ a book made up of parchments that were erased and then rewritten on, also known as a palimpsest. In the past, this Codex contained an astronomical poem in ancient Greek with, among elements of commentary on the poem, fragments of Hipparchus’ Catalogue. This palimpsest text, erased in medieval times, has been revealed through multispectral imaging2 by teams from the Early Manuscripts Electronic Library, the Lazarus Project and the Rochester Institute of Technology.

The fragments of the Star Catalogue are the oldest known to date and bring major advances in its reconstruction. Firstly, they refute a widespread idea that Claudius Ptolemy’s Star Catalogue is merely a “copy” of Hipparchus’ as the observations of the four constellations are different. Furthermore, Hipparchus’ data are verified to the nearest degree, which would make his catalogue much more accurate than Ptolemy’s, even though it was composed several centuries earlier.

For the research team this major discovery sheds new light on the history of astronomy in antiquity and on the beginnings of the history of science. Above all, it illustrates the power of advanced techniques, such as multispectral imaging, whose application on illegible palimpsests could save numerous lost texts on philosophy, medicine or horticulture from oblivion.

1 The Codex Climaci Rescriptus is kept at the Museum of the Bible in Washington DC (USA) and probably comes from the monastery of Saint Catherine of Sinai (Egypt), one of the oldest active monasteries in the world. It is composed of folios from a Greek manuscript of the fifth or sixth century AD.

2Multispectral imaging consists of measuring the light reflected by an object at different wavelengths of the electromagnetic spectrum, using artificial lighting and high dynamic range sensors. The data collected is then processed to extract relevant information, such as traces of erased writing, presented in the form of images. 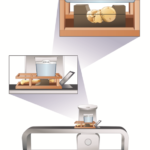