Ana Mateos and Jesús Rodríguez, scientists at the Centro Nacional de Investigación sobre la Evolución Humana (CENIEH), have published an experimental energy study in the journal Human Nature, using volunteers of both sexes aged 8 to 14, showing that digging is an activity requiring major physical effort at these ages, although it is not excessive. This effort of digging and extracting underground resources entails significant energy expenditure which depends on strength and body size, factors closely bound up with age.

The experimental study was conducted with 40 children and adolescents, both in the laboratory and in the open air, using the equipment at the CENIEH Bioenergy and Movement Analysis Laboratory (LabBioEM). The activity of digging to extract tubers or other underground resources, an essential activity for many groups of hunter-gatherers, and already practiced by the earliest hominins, was recreated.

In the experimental tests, energy expenditure was measured at rest and while digging with a pointed stick, to simulate an extractive activity that many traditional societies and quite a few communities of primates still engage in today. The researchers also analyzed how the different anatomical variables of the upper body and the fat mass and fat-free mass proportions in the metabolic rates of children and adolescents.

Beyond learning and practice

In many hunter-gatherer groups, children and adolescents participate in provisioning activities from very early ages. Performing these tasks habitually gives them experience and mastery which they combine with play as a way of learning.

“There are some tasks, like extracting resources from below the ground, which are easy to learn and practice. The physical constraint on doing this efficiently and optimally turns out to be strength and body size, which are linked to energy expenditure”, says Mateos.

Other factors beyond experience, like physical strength, can influence the acquisition of skills in certain tasks for young hunter-gatherers. However,

“children and adolescents in the Pleistocene could have spent several hours every day gathering food successfully, in addition to playing, looking after younger siblings, collecting firewood, or other tasks in the camp, in mixed-age and mixed-sex groups”, explains Rodríguez. 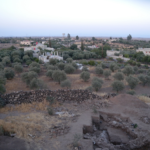