The CENIEH leads an experimental study of the possible uses for tools made from basalts at Olduvai Gorge (Tanzania), by analyzing the relationships between the petrological characteristics of this raw material and the formation of use-wear traces

The Centro Nacional de Investigación sobre la Evolución humana (CENIEH) has participated in an experimental study published recently in the journal Archaeological and Anthropological Sciences, on the possible uses of tools fashioned from basalts, volcanic rocks that are highly abundant at the Olduvai Gorge sites in Tanzania, through the first exhaustive analysis of the relationships between the petrological characteristics of this raw material and the formation of use-wear traces.

In addition to providing elements of great significance for interpreting human behavior at Olduvai Gorge, the results of this research led by the archaeologist Patricia Bello-Alonso furnish a model which will enable comparative studies for lithic industry assemblages in volcanic rocks from different archaeological and geological contexts to be conducted.

“The results we have obtained are a fundamental resource for analyzing the ways stone tools were used at the archaeological sites located in Beds I and II, in general, and at the Thiongo Korongo (TK) site in particular as, in this area, volcanic rocks are one of the key raw materials for the technological and, therefore, evolutionary development of the different hominin groups that occupied Olduvai more than two million years ago”, explains Bello-Alonso.

The main objective of the research, in which the Museo de Ciencia Naturales and the Instituto de Evolución Humana en África in Madrid also participated, was to determine how traces are formed in basalts at both the macro and micro scales, to enable their use to be identified. To do so, non-retouched flakes were employed and a wide variety of organic materials was worked upon: animal carcasses, tubers, wood, grass, cane and fresh bone.

“Carrying out these operations has allowed us to compile an experimental reference collection for greater understanding of the role played by the internal and chemical structure of basalts in the formation and development of use-wear traces”, she adds.

This multidisciplinary study, financed by the Ministerio de Ciencia, Innovación y Universidades (HAR2013-45246-C3-2-P and HAR2017-82463-C4-2-P), under the auspices of The Olduvai Paleonthropology and Paleoecology Project (TOPPP) on the Acheulean site of TK, led by the researchers Joaquín Panera and Manuel Santonja, was conducted at the Prehistoric Technology and Archaeology Laboratory of the CENIEH and the Emiliano Aguirre camp, at Olduvai Gorge itself. 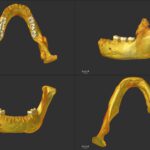 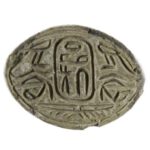