UNLOCKING THE SECRETS of the Ancient Coastal Maya

After more than a decade of research, Georgia State scientist Jeffrey Glover shares what he’s learned about the people from the Maya civilization who lived on a stretch of coastline in Quintana Roo, Mexico, over a span of 3,000 years.

Georgia State University anthropologist Dr. Jeffrey Glover grew up in metro Atlanta, but speaking to him, it sounds like his heart is in Quintana Roo. This part of Mexico’s Yucatán Peninsula has been the home base for an expansive research project spanning more than 10 years. His research there with Dr. Dominique Rissolo, a maritime archaeologist at UC San Diego’s Qualcomm Institute, has uncovered thousands of artifacts that help them shed new light on the ancient Maya people who lived along this stretch of coast.

Glover and Rissolo are working with an interdisciplinary and international team of researchers to uncover new insights about the dynamic interplay between social and natural processes that shaped life for these ancient, Maya people over the last 3,000 years. The team has just released a new article in the Journal of Island and Coastal Archaeology summarizing their findings to date.

“The Proyecto Costa Escondida”, which translates into English as the “hidden coast” project, has focused on the ancient Maya port sites of Vista Alegre and Conil.

“We chose the project name because the coast is literally hidden behind mangroves. We’ve canoed the coastline and you’ve really got to snake back to get to the site”, Glover said. “But at the same time, and more importantly, this region has been hidden from scholarship—there just hadn’t been a lot of work done there until we arrived”.

To date, the work has produced a wealth of knowledge about maritime Maya civilization since 800 BCE (Before Common Era). Glover, an associate professor of Anthropology, is using an historical ecology framework to better understand the dynamic relationship between humans and the environment at the ancient Maya port sites of Vista Alegre and Conil.

“This is about how people respond to change,” said Dr. John Yellen, program director for archeology at the U.S. National Science Foundation, which helped fund the research. “Through the lens of historical ecology, this broad team of researchers has shown how Maya adapted over centuries to a wide range of environmental changes. This insight into one society’s long-term adaptation to coastal environments provides a fruitful model for studying such interactions across many cultures.”

This region lies along Yucatan’s north coast, some hours from popular tourist attractions like Cancun and well-known archaeological sites like Chichen Itza and Tulum.

“What’s remarkable about our study area is that it represents one of the least developed coastlines on the northern Yucatan Peninsula,” said Rissolo, who was recently featured in a video series about the Maritime Maya. “When trying to understand the ancient maritime cultural landscape of the so-called ‘Riviera Maya,’ for example, your perspective is obscured by all-inclusive resorts, golf courses and theme parks. The shores of the Laguna Holbox, on the other hand, are still largely wild and offer a more unobstructed view into the region’s past.”

The site of Vista Alegre is a small island surrounded by mangroves that lies along the southern shore of the Holbox Lagoon (also called Conil or Yalahau Lagoon). Glover describes Vista Alegre as what was probably once a small, bustling port. Here, they’ve discovered and recorded as many as 40 rock-filled platforms that served as the foundation for perishable pole and thatch buildings. The largest is a pyramidal structure that stands about 13 meters—or nearly 43 feet—tall. Glover believes this probably served as a temple and a lookout where the site’s inhabitants could see if anyone was approaching by sea. Conil, on the other hand, is a much more expansive site located beneath the modern town of Chiquila and was encountered by early Spanish conquistadors who described it as a town of 5,000 houses.

Researchers have identified tens of thousands of artifacts and ecofacts (animal and plant remains that speak to past diets), which have helped improve our understanding of how the landscape has changed over time, how the people lived, and how they dealt with challenges not unlike those faced by people today, such as: rising sea levels and changing political and economic systems.

“We are coordinating and synthesizing all the different datasets that we have, which gives us a wider-angle picture,” Glover said.

The project, which has been funded by the National Science Foundation (NSF) and the National Oceanic and Atmospheric Administration (NOAA), combines traditional archaeological techniques (think digging with a small hand trowel or shovel) with new, high-tech practices for land and sea. Glover says it is a matter of making the most out of the materials at hand.

“Archaeology requires a broad knowledge of the latest scientific techniques mixed with a strong reliance on ‘MacGyvering,’ Glover said. “We often utilize rustic equipment combined with high-tech tools. On any given day, we might find ourselves in a small dinghy borrowed from the local community out of which we are running marine geophysical survey equipment or pounding PVC tubes into the sediments with a homemade fencepost driver.”

The complex work of marine geoarchaeology was spearheaded by Dr. Beverly Goodman-Tchernov and Dr. Roy Jaijel of the University of Haifa in Israel. The core samples include sediment from the coastline and give researchers a better idea of how the coastline has changed over time by looking at a host of different datasets. In particular, the remains of tiny creatures (foraminifera) are preserved in the cores. These creatures lived in very specific environments, so by finding certain species of foraminifera, the team can reconstruct what the coastal environment was like. Instead of being hidden as it is today, Vista Alegre was most likely once more open and purposely built on a peninsula that jutted into the lagoon making it a more obvious destination for ancient canoe-based traders.

Along with paleo-coastline reconstruction, Dr. Patricia Beddows of Northwestern University has been combing research on the modern hydrological system with oxygen isotope values from the core sediments to study how access to freshwater changed over time as a result of rising sea-levels. The team has to bring all of their drinking water with them to the site, so they are keenly aware what a limiting factor freshwater access could have been for past peoples. One idea is that there were springs near the site in the past that have been effectively drowned by rising sea level. To try to identify freshwater seeps (that are about two degrees Celsius cooler than the ocean water) the team is using a drone equipped with a thermal camera to identify areas that might represent past sources of freshwater.

The team also uncovered tens of thousands of pieces of pottery and hundreds of pieces of obsidian (volcanic glass used to make tools that can be traced to its original geologic location), which reveal these coastal peoples were involved in extensive trade. Glover says the diversity of these artifacts stands out when compared to that of nearby, inland sites. The research team believes the archaeological data reinforce the idea that these coastal peoples had much broader and more cosmopolitan connections because they were part of long-distance, canoe-based trade networks.

These trade connections are most evident about 1,000 years ago when researchers see a major realignment and expansion in international trade associated with the emergence of Chichen Itza as a powerful religious, political, and economic city.

“Strong evidence of this realignment comes from the obsidian data which reveals greater connections to parts of central Mexico, near modern day Mexico City” Glover said.

Many of these artifacts come from poring over the detritus—or garbage—left behind by this past civilization, Glover says this is often an archeologist’s goldmine. Mixed with the pottery and obsidian, the research team found items like spindle whorls, that would have been used to make cotton thread which could have been traded as bolts of cloth or used for fishing lines or nets.

When asked what is missing, Rissolo said “We would love to find an intact ancient Maya trading canoe! It’s possible that such a vessel may be preserved beneath the muddy bottom of the bays surrounding Vista Alegre. We would learn so much about these legendary watercraft.”

The team also discovered an array of natural materials, including more than 20,000 animal bones, from sharks, rays, turtles and marine gastropods (gastropods include animals like conchs and whelks which have been studied by another project leader, Dr. Derek Smith). The team is working closely with Mexican archeologists at the Autonomous University of Yucatan in Merida, Mexico to analyze the animal remains and burial sites that have been discovered.

Research came to a halt during much of the pandemic, but after months of excavations and discovery of so many artifacts, the team is still working to analyze their findings. Glover said they are also in discussions with local leaders in Mexico to create a community museum to highlight the region’s rich cultural and natural history.

“Our research gives us some idea of the shared challenges that coastal peoples faced — rising sea-levels, diminished freshwater, changing economic and political systems — and they probably leaned on one another.”  — Jeffrey Glover

Often, when people think about the ancient Maya, they may picture some sudden, cataclysmic event that upended daily life and led to end of this past, advanced civilization. Glover notes that this could not be further from the truth. Maya peoples are alive and well today in the Yucatan, Belize, and Guatemala. While the ‘collapse’ of Maya kingdoms between 800 and 900 CE often gets blown out of proportion in popular media, that does not mean that were not changes in settlements over time.

“I think it’s a story, not of a sudden or mass exodus, but a shift over time,” Glover explained, “and to understand these shifts we must understand the complex interplay of environmental and cultural factors, which is what our research is revealing.”

The research also highlights the specific lifestyles and adaptive strategies needed to live in a dynamic coastal environment and how this fostered a shared identity amongst coastal Maya communities.

“Our research gives us some idea of the shared challenges that coastal peoples faced – rising sea-levels, diminished freshwater, changing economic and political systems – and they probably leaned on one another, Glover said. “In some ways, I think it might have been easier to hop in your canoe and paddle down the coast to seek help than it was to walk over land.”

“The past, just like the present is not static, and these people were constantly having to make decisions. Sometimes those decisions meant sticking it out, and sometimes they meant re-establishing their lives right down the coast. This new article is a great summation of what we have learned to date. But, you know, there’s always more to be done, and we certainly have plans to continue.” Glover said.

Later this year, the team will start a new project with Dr. Tim Murtha, a colleague at University of Florida, to conduct a light detection and ranging (LIDAR) survey. They will collect detailed elevation data that can reveal the distribution of ancient Maya settlements like house mounds or pyramids. While not focused on the coast, the project will help the team better understand the relationship between inland and coastal communities.

Please visit http://costaescondida.org for more information on the project.

On this project, Glover and Rissolo teamed with Dr. Patricia Beddows (Northwestern University), Dr. Beverly Goodman (University of Haifa), Dr. Derek Smith (University of Washington), and others under the auspices of Mexico’s National Institute of Anthropology and History (INAH). 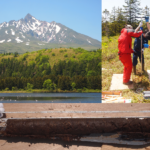 Tracing the effects of Climate Change on Historic Cultures in Hokkaido

Jewellery of the Frafjord Viking woman, delivered at museum’s door