The Temple of Augustus: How ruins from Libya became the focal point of an artificial landscape in Surrey

Walking around the artificial lake of Virginia Water, past the artificial cascade, you come across the ‘Temple of Augustus’, another artificial addition to the royal landscapes of Surrey. But how did these Libyan ruins come to make up part of the grounds of Windsor Great Park?

The city of Leptis Magna was founded in the 7th Century BC and rose to prominence in 193 AD under Emperor Septimius Severus who initiated a programme of enhancement through the provision of incredible docks, and a huge basilica complete with classical style columns. After his death in 211 the city began to decline, with the destructive tsunami of 365 and the invasion of the Vandals in the 5th Century.

1816, Hanmer Warrington arrived in Leptis Magna with friend, Augustus Earle. Only a few years earlier, Thomas Bruce, 7th Earl of Elgin had been hailed a hero by the British government on return from Greece with the stripped marble of the Parthenon, a response Warrington hoped to achieve with his presentation of the Leptis Magna ruins.

Louis XIV had taken 600 columns from the site and installed them in his palace in Versailles in the 17th century, whilst Rouen Cathedral and Abbey of Saint-Germain-des-Preps in Paris also sported Leptis columns.

Upon commissioning ships and creating an agreement with the Local Governor, Warrington came across resistance of the local Libyan people. Not a conservation effort, but a local quarrying issue, they defied the removal of the ruins. Cut stone had often been collected from these sites to aid building work whilst round columns were used as mill stones. They took to destroying the collected ruins as they were being loaded onto ships, leading to 3 columns still lying on the beach, having been abandoned by Warrington’s team.

After the destruction was accounted for, Warrington collected a vast collection made up of 25 pedestals, 15 marble columns, 22 granite columns, 10 capitals, 5 inscribed slabs and fragments of stone and sculpture. On arrival in Britain he was met with an unenthusiastic government who it is said were not ‘at all impressed or convinced of the value, either aesthetic or intrinsic, of the cargo.’

Having sat in the forecourt of the British Museum for 8 years, King George IV’s architect, Jeffry Wyatville expressed an interest in using them to create a folly in the grounds of Windsor Castle, which then stretched as far as Virginia Water.

Named the ‘Temple of Augustus’, possibly as a reference to the King’s full name, George Augustus Frederick, the site consisted of the 15 columns arranged in a semi-circle, and 2 parallel colonnades. Down the centre of the ruins ran a carriage road, allowing King George IV to pass under the road to Ascot. Wyatville placed fragments of cornices along the bridge mimicking an arch in a city wall.

Knowledge of the classics was important in high society, and the introduction of follies, ornamental ruins built to serve purely as landscape features, showed a level of class and sophistication. As William Gilpin, contemporary architect, noted about the importance of a fake authenticity, “if the ivy refuses to mantle over your buttress… you may as well write over the gate, Built in the year 1772.”

All pictures taken by Scout Newby. 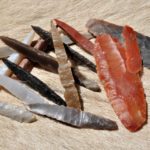 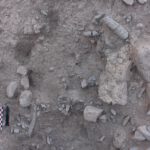 Cremation in the Middle East dates as far back as 7,000 B.C.