A unique collection of rare and valuable items relating to the former poet laureate Ted Hughes has been acquired by the University of Huddersfield.

The Mark Hinchliffe Ted Hughes Collection – described by the collector’s journal The Private Library as ‘one of the finest Hughes collections in private hands’ and ‘a rival to collections held in University libraries on both sides of the Atlantic’ – was gathered over a lifetime by the late Huddersfield poet and Hughes expert, Mark Hinchliffe, and came to the University from Hinchliffe’s widow, Julie.

The collection was acquired with the help of generous funding from the National Heritage Memorial Fund, the Victoria and Albert/Arts Council England Acquisition Fund, The Friends of the National Libraries, and the University of Huddersfield.

Dr Steve Ely, Director of the Ted Hughes Network at the University comments: “We are delighted to have acquired Mark Hinchliffe’s outstanding collection. It comprises over 170 items, including signed first editions of dozens of Hughes’ trade, limited-edition and fine-press publications; original letters written by Hughes and his first wife, the poet Sylvia Plath; signed and annotated books from Hughes’s personal collection; and, some absolutely unique items: a very fine ceramic jaguar sculpted by Hughes in 1967, the only intact example anywhere in the world of Hughes’s work in the plastic arts.

“There is an album containing hundreds of photographs, including some previously unknown photographs of both Hughes and Plath; a holograph manuscript of the radio play ‘Orpheus & Eurydice’ with some significant differences to the broadcast and published versions, and, a bespoke edition of the Gehenna Press’ limited edition Howls & Whispers, comprising the original fine-book, 8 original watercolours by Leonard Baskin – two of which are pictured here –  and a unique copper-plate, engraved portrait of Sylvia Plath.

“He was a great supporter of the work of the Ted Hughes Network at the University, and it is fitting that his collection should be retained in his hometown.”

Julie Hinchliffe comments: “I am absolutely delighted that the University of Huddersfield has acquired Mark’s extensive Ted Hughes collection. It was his wish that the collection should remain intact and be available for academics, students and the public to enjoy as much as he did. I know that he would be very pleased with its new home.”

The Collection will be housed in the University’s archive, Heritage Quay. Dr Rebecca Bowd, University Archivist comments: “We are thrilled to be able to preserve Mark Hinchliffe’s fantastic collection at Heritage Quay where for the first time it will be freely accessible to the public. The Ted Hughes Archive at Heritage Quay already holds three other Ted Hughes-related deposits: the Donald Crossley Papers, the Christopher Reid Papers and a comprehensive collection of Hughes’ fine and small press work.

“The purchase of this collection cements Heritage Quay’s reputation as a must-visit archive for Ted Hughes scholars world-wide and we can’t wait to welcome researchers to explore the collection here at the University of Huddersfield.

“Heritage Quay will also work with the Ted Hughes Network to arrange public-facing events to engage people with the collection—a symposium, talks, poetry readings, exhibitions, creative writing workshops and events for young people are planned. The first of these, an exhibition featuring highlights from the collection will take place at Heritage Quay from late June to mid-September.”

Dr Simon Thurley CBE, Chair, National Heritage Memorial Fund comments: “The National Heritage Memorial Fund are delighted to support the University of Huddersfield with £33,775 to enable the purchase of the final five works from Mark Hinchliffe’s private collection. The works that we have supported are considered unique and will now be shared widely by the university’s Ted Hughes Network & Heritage Quay, including through children’s workshops and creative writing activities.”

The Arts Council England/V&A Purchase Grant Fund, which has contributed £35,000, adds that “‘we are delighted to be able to support the acquisition of the Hinchliffe Archive by the University of Huddersfield. Not only is it an important collection of material which explores the life and work of Ted Hughes, but the collection is fascinating in how it reflects the relationship between Hughes and Hinchliffe; it has much research potential for students and academics alike, both national and international.”

Heritage Minister Nigel Huddleston said: “It is fitting that this extensive Ted Hughes collection has been acquired by the University of Huddersfield in the poet‘s home county. I am delighted that UK Government funding through the National Heritage Memorial Fund has enabled it to happen. These brilliant works will now be available to academics, students and members of the public where they will provide endless inspiration and enjoyment for years to come.” 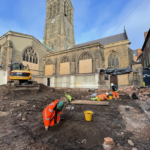 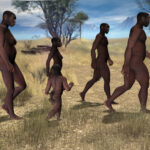