Researchers from the Centre for the Study of Archaeological Heritage (CEPARQ-UAB) working at the Cova Gran de Santa Linya have discovered the remains of a Homo sapiens female living in the eastern Pre-Pyrennees during the Upper Palaeolithic period, around 14,000 years ago. There is a scarcity of prehistoric remains of modern humans in the Iberian Peninsula. The study of Linya, as she has been named, will allow delving deeper into what is known about them and how hunter-gatherers lived in the northeastern part of the peninsula.

16/06/2021 The cave known as Cova Gran (Avellanes-Santa Linya, Noguera) preserves countless vestiges within its sediments, which allows researchers to reconstruct over 50,000 years of history of those living in the Pre-Pyrennean region (Lleida province), from the Neanderthals to the the first Homo sapiens as well as the hunther-gatherer-lifestyle to the first farmers and herders.

The research team at the Centre for the Study of Archaeological Heritage of the Universitat Autònoma de Barcelona (CEPARQ-UAB) studying the Cova Gran since 2002 has found remains dating back from 45,000 to 4,000 years ago. But no bones of those living there had ever been discovered. Until last year’s dig campaign, in which the skeletal remains of a human, in partial anatomic connection, were found two meters below ground in a lateral excavation area. A location in which researchers would not have imagined finding these types of remains.

The set ofrecovered remains, which has been made public today, corresponds to a woman who has been given the name of “Linya, the woman from Noguera”. The bones include two femurs, one of them connected to the pelvis, as well as the long bones of the upper extremities (hummerus, radius/cubitus) and lower extremities (tibia and fibula), the metapodia and several phalanges. The skull and axial skeleton (vertebrates and ribs), although present, had little representation.

“The remains of Linya open a new door that brings us closer to discovering the circumstances in which she died, but also details about her life and that of those she lived with in the region. And at the same time, she is a key figure in learning about the anatomy and genetic heritage of hunter-gatherer societies at the end of the Pleistocene in the northeastern part of the Iberian Peninsula”, highlights Rafael Mora, Chair Professor at the UAB Department of Prehistory and researcher at the CEPARQ. “The combination of different paleoanthropological, forensic, genomic and archaeological analyses currently underway will provide indicators which will enrich and rectify the current perspective of a discovery we only have preliminary information on thanks to the digs we are conducting”.

The state of conservation of the bones has made it necessary to apply stabilizing and preservation processes in views of future studies. These processes are being conducted now at the Catalan Institute of Human Paleoecology and Social Evolution (IPHES).

Placed in a natural receptacle

The remains were found within what is considered to be a natural receptacle, delimited by various blocks of large dimensions fallen from the rockshelter. Researchers are currently investigating whether the extremities were moved towards the cubicle, while the axial skeleton and skull were protected under these large rocks. What researchers have been able to determine is that the location is where the person was lain once she was dead. According to the position of the femurs, she was lain directly on the ground in a supine position. The first paleoanthropological characterization conducted indicates that the pelvic girdle corresponds to an adult female, possibly of small stature.

The skeleton appeared at the base of an archaeological sequencing of 7 consecutive archaeological levels containing an abundance of lithic tools, faunal and carbon remains, all of which point to the use of the site as a living space. But the bed on which the body was lain did not contain any of those elements. Currently, the research team is looking for possible funerary offerings, which were very common in the burials of Homo sapiens. The sediment of the space marked out by the large blocks is now being sampled to recover micro residue that could indicate that the body was covered with animal skins or plant fibers. This would justify the way the body was lain on the ground, without the need of digging a burial space.

“We are aware of the need to be cautious when affirming that this is an intended burial site”, researcher at the CEPARQ Jorge Martinez-Moreno points out. He goes on to say that, “mortuary practices among hunter-gatherers point to different possibilities, ranging from an intentional burial to a secondary burial, the burial of part of the body, cannibalism, or an accidental death. We will need to evaluate these scenarios depending on the results of what we dig up in the area in which these remains appeared”.

Carbon-14 dating using fragments of the carbon found in the archaeological levels in which the remains appeared indicate that the sediment was formed in less than a millennium, from around 14,400 to 13,500 years ago. The explanation for why this sediment grew so much, and which was accompanied by the detachment of several massive blocks from the cave’s cornice, is being analyzed through the geomorphology and material that make up this part of the mountain’s slope.

A moment of ecological change

The time period in which Linya and her people lived was critical in climatic terms. Some 14,700 years ago, the world’s extremely cold and harsh climate conditions characteristic of the Last Glacial Maximum (approximately 30,000 to 15,000 years ago) suddenly changed and in a period of less than 100 years, transformed into a new climate regime similar to the one existing now. This event, known as the Bölling/Allerød warming, occurring some 14,700 to 12,900 years before the present, and was characterized by a rise in temperatures and rainfall, which produced relevant ecological changes.

Despite the fact that the impact of this event on the Pre-Pyrennees is not greatly known, some indicators recovered at the Cova Gran have allowed researchers to analyze this incident. Carbon dating analysis indicates that the human species living there during the Last Glacial Maximum only used European red pine (Pynus sylvestris) timber for fuel. In the sequence now being dug, in which the remains of Linya were discovered, other new taxon’s in addition to red pine carbon were identified, such the common juniper (Juniperus), cherry trees (Prunus) and buckthorn (Rhamus catharticus/saxatilis), a set of trees and shrubs belonging to milder climates, different to the harshness of the forests of the Last Glacial Maximum.

Very few remains of Homo sapiens in the Iberian Peninsula

The amount of human remains discovered in the Iberian Peninsula and corresponding to the Upper Paleolithic period (20,000 to 12,000 years ago) is scarce. In this sense, the Cova Gran will be key to learning more about their anatomy and where the Hunter-gatherer societies came from at the end of the Pleistocene.

A recent paleogenetic study conducted by the Max Planck Institute on remains recovered from the El Mirón Cave in Santander and the Balma Guilanyà rock shelter in Lleida indicates that the genome sequencing of the “Red Lady of El Mirón”, dating back 20,000 years, reveals close ties to human populations of Western Europe. A situation which changes in the remains found at the Balma Guilanyà rock shelter, dating 1,000 years later than the remains found at the Cova Gran, in which there is a continuation of genetic markers common to European populations, but also new markers which are present in the populations of the Italian Peninsula.

Therefore, in the interval of 20,000 to 13,000 years, the genome of Pyrenean populations registers contacts with populations from the Mediterranean. “Maybe the new climate conditions of the Bölling/Allerød warming facilitated regular contacts between these geographic areas?” researchers wonder. “The human remains at the Cova Gran will be key to evaluating the solidity of this interesting intuition”, they point out.

The CEPARQ team is convinced that the unexpected discovery of Linya will help to modulate the notions now sustained of the anatomy of those Homo sapiens, “of whom we have less precise knowledge than we do of Neanderthals”, researchers state. They also mention the fact that “the causes leading to the appearance of a space created by large blocks will aid us in learning about the behavior and decisions taken by those people regarding a transcendental and common event such as death: what ritual was followed by these people who are part of our collective, but are no longer present? The remains of Linya now pose several challenges, and we hope to solve them in the coming years”, they conclude.

The archaeological importance of the Cova Gran de Santa Linya

The Cova Gran de Santa Linya, discovered in 2002, is a site measuring over 2,500 square meters, considered key to the study of the presence of humans in the northeastern Iberian Peninsula.

It is one of the few sites of the Mediterranean region in which vestiges of a moment of “transition” have been found, such as those of the last Neanderthals (approximately 45,000 years ago) and the appearance of modern humans (some 37,000 to 30,000 years), their survival during the Last Glacial Maximum (20,000 to 15,000 years), and the appearance of the first farmers and herders (7,000 to 4,000 years ago).

The research conducted by the CEPARQ-UAB team at the Cova Gran de Santa Linya includes the financial support of the Spanish Ministry for Science and Innovation, the Archaeology and Palaecology Service of the Ministry for Culture of the Government of Catalonia, the Institute for Lleida Studies (IEI) of the Lleida Provincial Council, the Palarq Foundation, the Leakey Foundation and the City Council of Les Avellanes i Santa Linya. 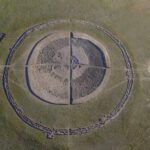 Ancient Genomes Trace the Origin and Decline of the Scythians 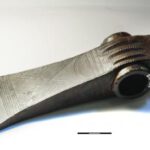