The news of an upcoming Italian translation of “Writers & Lovers” by Lily King, brought back the memories of the terrible day and a half I spent reading this novel (and also a few reflections on the criteria on which Italian publishers chose what to translate and not to translate, but let’s not well on that… for now).

My quite strongly negative opinion on this novel seems to clash with the many 5 star comments on web platforms (e.g.: Goodreads), therefore, for a while I thought I just hadn’t understood the deep meaning that Lily King wanted to convey with her writing. Then, fortunately, in July, the Times Literary Supplement published a review that shared most of my negative thoughts (by Evelyn Toynton), and I finally felt understood.

Now, the following review will contain a number of spoilers: therefore, if you really really want to read “Writers & Lovers” you might want to stop here. If you want to save yourselves a rather pathetic experience, please feel free to carry on.

I’ll be clear from the beginning: this novel is absolutely obnoxious, probably one of the worst things I’ve ever read. It has almost no plot, but this should never be a problem: many of the best books ever written don’t even need a plot to gain power, because it is through the narrative itself, the words, the reflections, the beauty of the language, the depth of the thought behind the story that a book should find its strength. This is not the case of “Writers & Lovers”. Depth of thought and reflections do not find their place here. We must admit, however, that its title is quite truthfully descriptive: this is indeed fundamentally the unrealistic story of a woman who fancies herself a writer and sleeps only with other (mostly) self-proclaimed writers. She is also a bit racist: at some point she talks about a guy she used to be with, a Spanish boy who “smelled of Europe”.

The main problem is that Casey, the protagonist (the “writer”) is a very weak, shallow, and annoying character. She has lost her mum, and this is certainly terrible, but missing her mum seems to be her only distinctive trait. Shortly after this loss, however, she has had an affair with a married guy she met at a retreat for writers (!).

Then, she’s so heartbroken that he’s out of her thoughts (and of the story) around page 50 of 324. We don’t really know why the protagonist calls herself a writer. She has not managed to finish her magnificent novel in 6 years, she has not written anything else in the meantime, and she has chosen to be a waitress in a place where they treat her like a slave.

I say “chosen” because she has purposely failed an interview as secretary, because she feels she’s a true creative artist and cannot, therefore, spend her time writing “thank you letters”. Therefore, she’s also an unnerving snob. When she’s not serving at the tables of the restaurant, she surrounds herself with a bunch of other pretentious self-proclaimed writers (and a few, still annoying, real ones), who are basically either total losers or people who think too much of themselves. Or both. All they talk about are their boring books and their failed love lives.

Among these writers, she decides to date two men at the same time: an established author with some middle age crisis and a broken life (he’s a widower with two small children), and a young perfect idiot fed with glory dreams. None of their characters is well developed by the author, as we only see these two poor devils playing the role of Casey’s marionettes. At the end, she chooses the young loser, but only after destroying the life of the poor widower by spending time with him and his children to the point that they develop a deep affection for her. In spite of this, she dumps him because she doesn’t want to be overshadowed by him being already famous and established and bla bla bla, but basically because he’s old and mature, and therefore brushes his teeth before sex, which, instead, she likes rough and unexpected.

All pretty terrible so far. But the worst, I think, is when she destroys centuries of pedagogy and, despite stating she resents high school education, she goes to an interview to become a school teacher. This is her chance to come up with some nonsense about how to teach literature in this new age way: the kids should never study context and interpretation, that’s boring, they should just think of what *they feel* when they read literature. As a teacher, let me tell you: this is not only silly and naive, but also offensive. Of course, after stating this complete rubbish, she is hired. The absolute climax is reached when, at a literary festival in her school, she’s asked to give a speech on literature, and comes up with some cheesy blabbering about her own life and how she’s had an important loss in her family, several failed relationships, and her only “home” was writing her bloody book.

Now, the bloody book. Again, a very unrealistic scenario: after a few rejections, she finds an agent, makes some changes, gets a contract with a publishing house, which will pay her enough to cover her student loan and a year of rent. Of course. Easy-peasy. You write, you complain a lot, you make money.

In the middle of all this useless story, there’s a hint at some health problems. She might have cancer. It could have been powerful to see how such a weak and whiny character would deal with the illness, with the idea of death. Maybe she could have even died to make the ending more surprising and deep. But this is just a non-developed plot device, and Casey finds out she’s fine, she has nothing serious, life is all nice again. Happy ending for Casey: the young boyfriend who can make her life sexy (but of their “love” we do not do much because she spends more time with the old guy throughout the book), a brand new job in education (although she has no clue about pedagogy), a book that pays at least $80k and will make her famous; a perfect health. She can happily make out with her nice boy in a leather jacket in the parking lot of her new school, after finding out she’ll be rich for having written a love story set in Cuba. Bingo!

Did we really need this bad rom com? 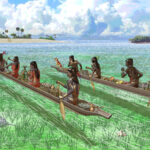 The shoulders of ‘Homo antecessor’ and modern humans are similar