Adrián Pablos, a scientist at the Centro Nacional de Investigación sobre la Evolución Humana (CENIEH), co-leads a paper published in PaleoAnthropology, the official journal of the PaleoAnthropology Society, looking at the morphology and anatomy of a partial foot recovered over 25 years ago at Amud Cave (Israel), which confirms that the individual Amud 9 was a Neandertal woman from the Late Pleistocene, with a stature of some 160-166 cm and weight of 60 kg.

Over the course of several excavations conducted in the twentieth century at Amud Cave, remains of at least 15 Neandertals were found. A systematic and detailed study of one of these individuals, Amud 9, has found that the fossil possesses the traits usually associated with Neanderthals in the different elements of the foot, tarsals, metatarsals and phalanges, which differ from those of modern humans, both fossil and recent.

“Most of these traits are related to the typical, exceptional robustness of the postcranial skeleton, that is, from the neck down, observed in the majority of Neandertals”, explains Pablos.

Sex, weight and height estimates in fossil populations are normally based on the dimensions of the large leg bones. However, in the case of Amud 9, only a fragment of tibia, the talus or ankle bone, one metatarsal or instep bone, and several phalanges are conserved.

As no long leg bones have been found, the researchers applied different mathematical estimates based upon the foot bones, thus obtaining an approximation to important paleobiological parameters.

“Knowing parameters such as the body size and sex of this individual helps us learn a bit more about what the Neandertals were like”, he says.

The participants in this paper, entitled A partial Neandertal foot from the Late Middle Paleolithic of Amud Cave, Israel, are researchers from Spain (the CENIEH), the United States (University of New Mexico and Arizona State University), and Israel (Tel Aviv University and The Hebrew University of Jerusalem). 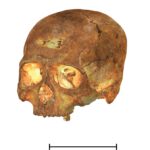