A study highlights the African affinities of the southwestern European Acheulean

The Centro Nacional de Investigación sobre la Evolución Humana (CENIEH) is the co-leader of a study published this week in the Journal of Paleolithic Archaeology which presents a synthesis of human occupation in the Iberian Peninsula Atlantic margin during the Early and Middle Paleolithic, and highlights the African affinities of Acheulean industry in southwestern Europe.

Over recent years, a team whose members include the CENIEH archaeologist Manuel Santonja, and Eduardo Méndez, leading author of the study trained at the CENIEH, has excavated and interpreted important archaeological sites on the banks of the Miño River, on both the Portuguese and Spanish shores, with singular Acheulean and Mousterian assemblages.

The chronology attributed to these sites, the second half of the Middle Pleistocene and the first part of the Late Pleistocene (between 50,000 and 400,000 years ago), and the characteristics of the knapped utensils recovered allow close parallels to be drawn with other regions of the Iberian Peninsula, and rule out any kind of time mismatch in these stages in the northwestern area, as had been proposed earlier.

Some of the sites excavated, and in particular the Acheulean one at Porto Maior (As Neves, Pontevedra), have produced unusual assemblages of large utensils, handaxes and cleavers, which make a decisive contribution to underlining the African affinities of that industry in the Iberian Peninsula and southwestern Europe, in contrast to Acheulean assemblages identified in the northernmost areas of the continent, where the distinctive technological features of the African Acheulean arrive less crisply defined. 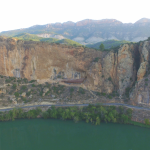 The landscape in the Pre-Pyrenees inhabited by Neanderthals 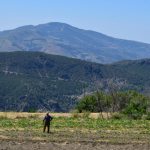