The study carried out by the Universitat Jaume I, the Municipal Archaeological Museum of Cartagena, the Provincial Council of Castellón and the University of Barcelona confirms that its use during the Mesolithic period was greater than previously thought.

New discoveries and material reviews by an inter-institutional research team have confirmed that the economic context at the end of the transition between the Pleistocene and the Holocene on the Mediterranean coast were richer, more complex and more varied than was previously thought. The exploitation of marine resources was not limited to the harvesting of molluscs, but also included fishing, although not many remains have been preserved, probably because the preservation of these types of materials is more delicate or because of the eating habits of ancient human populations.

Until a few years ago, little was known about the characteristics of the economy of hunter-gatherer groups in the Mediterranean during the transition from the Pleistocene (the glacial era, the Palaeolithic) to the Holocene (post-glacial, the time we live in today). Most of the studies carried out in the Iberian Peninsula suggested that the sites of marine exploitation were located particularly in the Cantabrian and Atlantic area, but the new data and studies provided by the research team can change this paradigm.

The research and analysis work, whose conclusions have been published in The Journal of Island and Coastal Archaeology, has involved Dídac Román, doctoral researcher of excellence of the GenT Plan of the Valencian Regional Government in the Department of History, Geography and Art at the Universitat Jaume I and the Pre-EINA research group; Miguel Martínez Andreu from the Municipal Archaeological Museum of Cartagena; Gustau Aguilella from the Archaeological and Prehistoric Research Service of the Castellón Provincial Council and Josep Maria Fullola and Jordi Nadal from the Prehistoric Studies and Research Seminar (SERP) of the University of Barcelona.

Data collected during the research confirm that the use of marine resources during the late Palaeolithic and Mesolithic on the Iberian Mediterranean coast was clearly more common than was previously thought with the data available at the time. The difference regarding the presence of less evidence than in the case of the Cantabrian and Atlantic coasts, where there are more hunter-gatherer-fisherman sites catalogued, could be due to different reasons: greater richness and diversity of life due to the cold marine currents, more abundant in nutrients; presence of tides and other environmental factors and better preservation of the sites over time thanks to a coastal platform and a steeper coastline that protected them from the progressive flooding of the environment with the melting of the poles during the Holocene.

Dídac Román, Miguel Martínez-Andreu, Gustau Aguilella, Josep Maria Fullola & Jordi Nadal (2020): “Shellfish collectors on the seashore: the exploitation of the marine environment between the end of the Paleolithic and the Mesolithic in the Mediterranean Iberia”, The Journal of Island and Coastal Archaeology.

The new findings and examinations of material carried out by a multi-institutional research proved the economic context at the end of the transition between the Plesitocene and the Holocene in the Mediterranean coasts to be richer, more complex and varied than what we thought. Exploitation of marine resources was not limited to a recollection of molluscs, but it also included fishing, although not many remains were preserved, probably because the preservation of such materials is more delicate or due to the eating habits of ancient human populations.

The conclusions of this research and analytical study have been published in The Journal of Island and Coastal Archaeology. Among the participants in the study are Dídac Román, researcher at Plan Gent of the Valencian Government in the Department of History, Geography and Arts of the University Jaume I and the research group Pre-EINA; Miguel Martínez Andreu, from the Archaeological Museum of Cartagena; Gustay Aguilella, from the Service of Archaeological and Prehistoric Research of Diputación de Castellón, and Josep Maria Fullola and Jordi Nadal, from the Prehistoric Studies and Research Seminar (SERP) of the University of Barcelona, in which the first signer of the study participates as well.

Until some years ago, we did not know much about the economic features of hunter-gatherer groups in the Mediterranean during the transition from the Pleistocene (ice age, Palaeolithic), to the Holocene (post-glaciation, current moment we live in). Most of the studies carried out in the Iberian Peninsula suggested that the areas of marine exploitation were specifically in the Cantabrian and Atlantic areas, but new data and studies conducted by the research team change this paradigm now.

The collected data during the research study states that the use of marine resources at the end of the Palaeolithic and Mesolithic in the Iberian Mediterranean coasts was more common than what people thought with the existing data. The difference regarding the presence of less evidence in the Cantabrian and Atlantic coasts, where there are more areas of hunter-gatherer-fishers, could be due to several reasons: more richness and life diversity due to cold marine currents, more nutrients; presence of tides and other environmental factors, and a better preservation of the areas over time (thanks to a littoral platform and an abrupt coast that protected these from a progressive flood of the environment with the melting of the poles during the Holocene).

Although the results of the article resulted from an interdisciplinary study, in which members of different research centres collaborated to obtain data from all regions, SERP-UB has led two essential aspects in this study. On the one hand, the analysis of the bioarchaeological elements –mainly faunistic remains–, on which the conclusions are based in order to show the importance of the utility of the marine resources by the communities of hunter-gatherers in the study area. On the other hand, obtaining radiocarbon dating in different sites, some excavations from years ago and others which are currently active. These datings are the ones to enable researchers to date the exploitation marine events between 13,000 and 7,000 years ago approximately. Moreover, the SERP studies carried out the interpretation of data in the Catalan area, with the examination of material from old excavations that are now in different museums.

Among these are the collections in the Archaeology Museum Salvador Vilaseca in Reus, which features material from key sites for the current study, such as Camping Salou (Salou) or the cave Cova del Solà d’en Pep (Hospitalet de l’Infant), excavated by Salvador Vilaseca. Although they are not mentioned in the article, other synchronic archaeological excavations are now a target excavation for SERP in Catalonia. The objective is to go beyond the evaluation of the importance of the subsistence of marine origins in the coastal areas but also to value the type of resources among the last populations of hunter-gatherers in the area. Thus, shells used as ornaments have been found in Priorat (El Filador and Hort de la Boquera), Moianès (Balma del Gai), La Noguera (Cova del Parco) and even in Cerdanya (Montlleó).

Researchers analysed remains from ten archaeological sites, located over the 800 kilometers of the Mediterranean coast, from Tarragona to Málaga, specifically La Cativera, Camping Salou and Solà d’en Pep (Tarragona); L’Assut and La Cova (Castellón); El Collado (Valencia); Algarrobo, Caballo and La Higuera (Murcia)and Nerja (Málaga). Contrary to what people thought, places in the south show a larger diversity of resources (the most paradigmatic is in the cave in Nerja). This would happen due to the entrance of waters from the Atlantic Ocean, its proximity, and it can be proved because there is presence of species such as L. Obtusata and species from colder climates such as cod species M. Aeglefinus and O. Pollachius. The Mediterranean is poorer regarding its biology due to salinity, temperature, lack of nutrients and unpredictable tides.

In general, the exploitation of marine resources (mainly molluscs) is related to the exploitation of terrestrial invertebrates and the presence of mammal remains (deer, Iberian ibex, rabbits, among others). However, researchers confirmed there is a decrease in terrestrial invertebrates in favour of marine resources over time. This feature has been observed in those places that conserved remains over long periods of time such as the cave in Nerja, or studied areas that show an older chronology such as Càmping Salou, La Cova, Caballo, Algarrobo and La Higuera. Among the studied molluscs are sea urchins (Solà d’en Pep and Nerja), crustaceans (Caballo), and cephalopods (Nerja), and among fish, the red sea bream is the most found in places with seasonal marsh (El Collado, Caballo and La Higuera), varieties of cod in Nerja and marine birds and mammals (Monachus and Deplhinus).

Another important aspect of the study was to evaluate whether the location and exploitation could be linked to the proximity to the sea, but according to the obtained data, at the time of occupation, these places were not exactly coastal areas (La Cova and El Collado, for instance); their inhabitants had to move about thirty kilometres to get supplies.

The research team used data on the fluctuations of the sea level during its activity in the late Palaeolithic and Mesolithic to calculate the distance to the coast. To estimate the distance, they combined different digital models of the area with bathymetry, which enabled a simulation of different positions of the coast in ranks, and researchers could specify whether it was within the two-hour isochrone of the sites, a distance considered the common area where hunter-gatherers carried out their activities.

Dídac Román, Miguel Martínez-Andreu, Gustau Aguilella, Josep Maria Fullola & Jordi Nadal (2020): “Shellfish collectors donde the seashore: The exploitation of the marino environment between the end of the Paleolithic and the Mesolithic in the Mediterranean Iberia”, The Journal of Island and Coastal Archaeology. tandfonline.com/doi/full/10.1080/15564894.2020.1755395

Press release from the University of Barcelona. 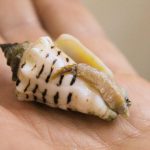 3D reconstructions of boats from the ancient port of Rome